The world’s major cities are increasingly investing in attractive landscaping and the hub of transit, technology and transportation are ideal locations for green infrastructure to become an investment in public health and well-being. 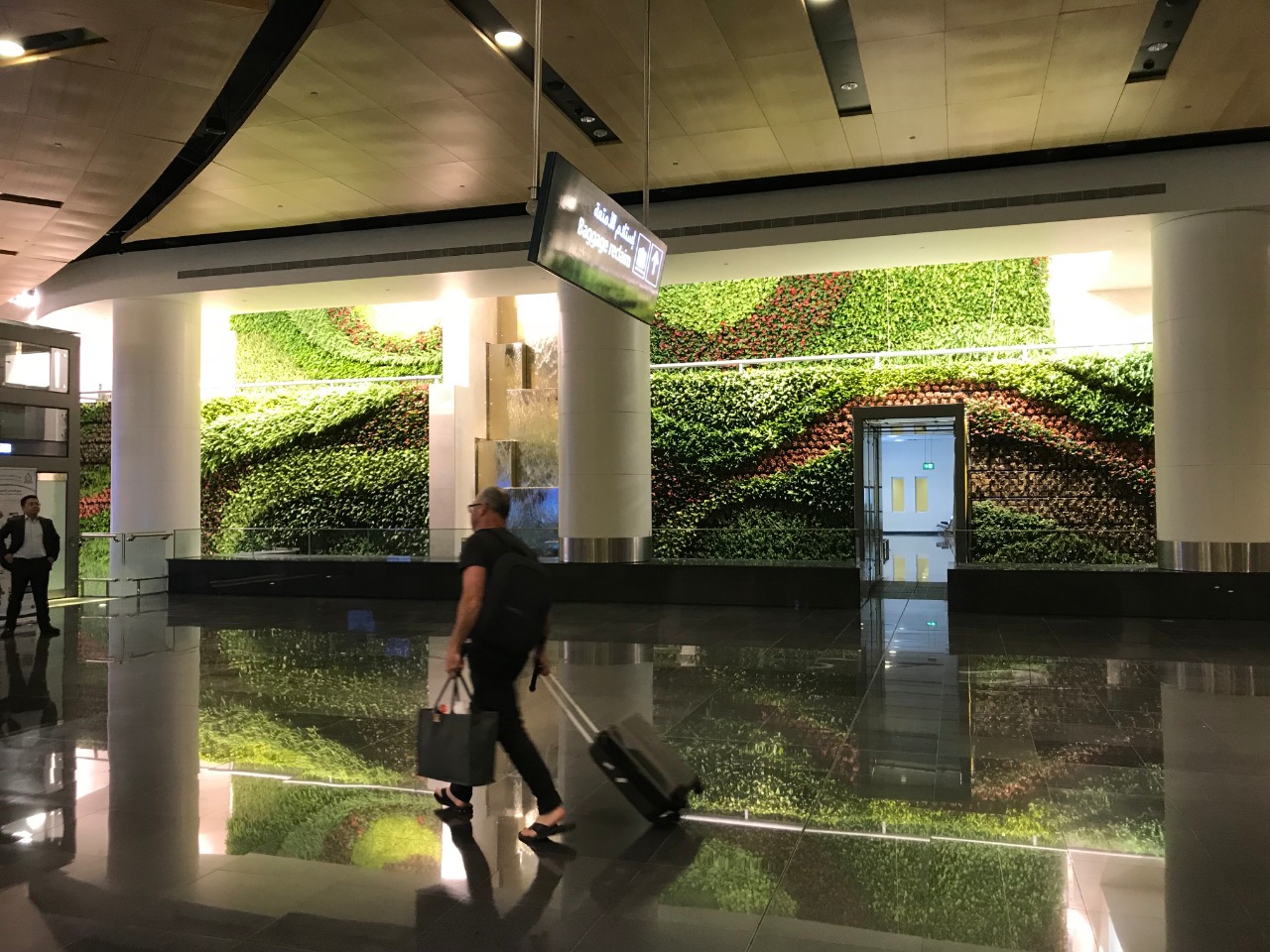 In under five decades, The Sultanate of Oman has transformed into a modern state and is becoming an ever more attractive destination for business and leisure travel. In order to keep pace with subsequent rapid growth, the Gulf State has invested in the expansion of its airport in Muscat; offering an ultra-modern infrastructure that spans a total area of 335,000m², making the airport an impressive gateway to the world. It is characterized by contemporary interiors with subtle Omani overtones which successfully blends traditional and futuristic themes. The new Muscat International Airport opened to operations on 20 March 2018. After many years of planning and construction, the new passenger terminal of Muscat Airport is exemplary in many respects of pioneering architecture.

The biophilic interiors of the new airport have unique features such as living green-walls, interior landscape & a recreated dry wadi. 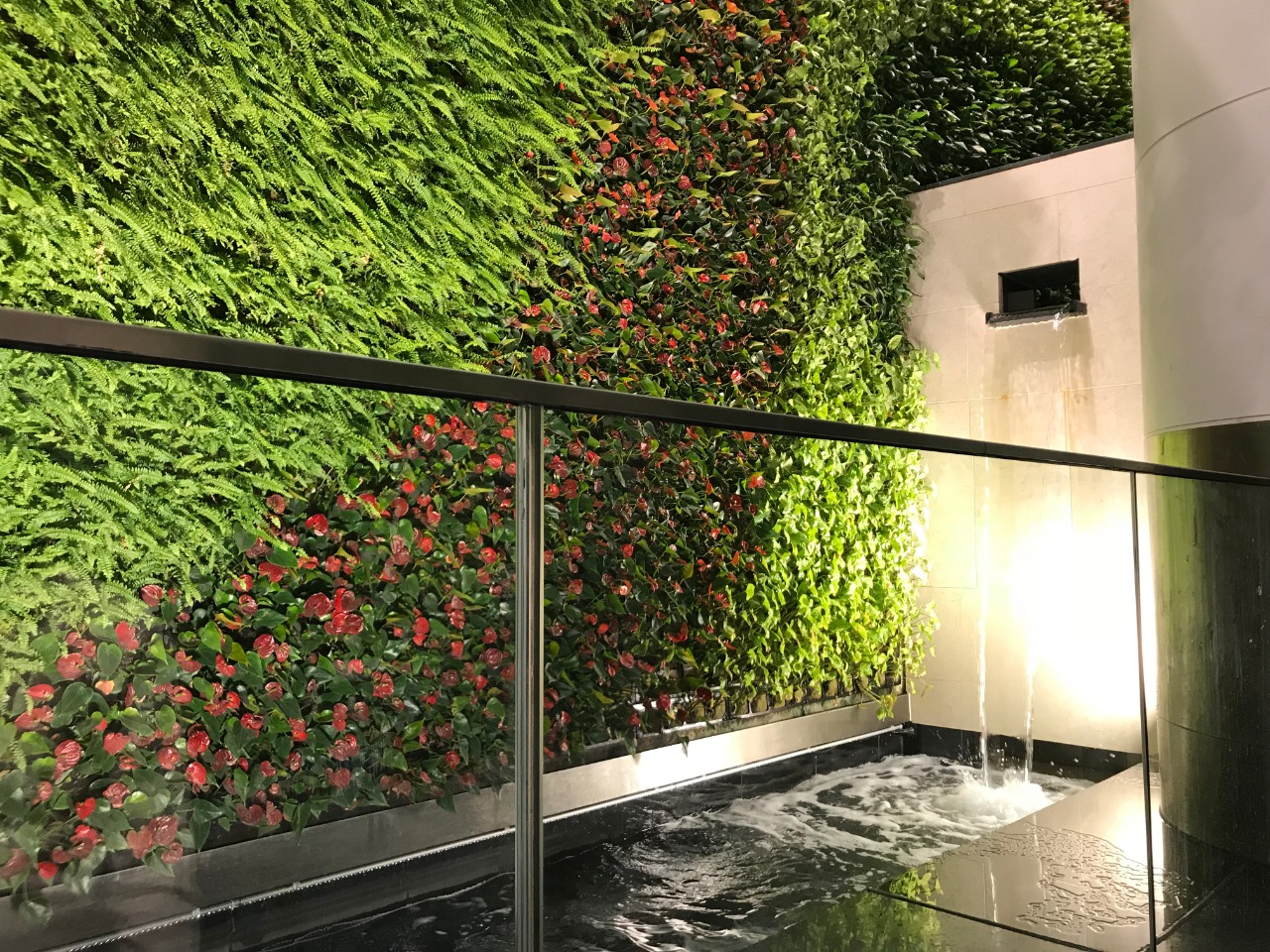 Living green-walls are the best solution and latest growing trend in implementing an environmentally friendly solution to vertical spaces. It offers a visual feast of lush greenery and an oasis ambience to the overall urban architecture. Changi Airport, Singapore, Edmonton International Airport, Canada and Christchurch Airport, New Zealand are among the international airports that have installed living greenwalls at their terminals. A unique pair of identical living walls are located inside the Passenger Terminal Building (PTB) in both the arrivals and departures areas of the Muscat Airport. It spans across three levels and covers an area of 400 m² in total, which is the biggest of its kind in the GCC. This product is developed by Biotecture Ltd UK, a company that provides green-walls technology to transform any urban environment. The patented hydroponic, modular system brings a new level of sustainability to vertical gardens through intelligent water management and stable system dynamics. Uniflora and Proscape played a key role in its design, coordination, implementation and are responsible for ongoing maintenance. The designs are as true to the originals as botanically possible, from the drawings to reality, thus producing a verdant masterpiece.

These living green-walls boast a variety of plants that are procured from Europe and are grown in compact modular panels with an inert, hydroponic medium. An integrated irrigation system is included with precise pressure compensated drip tubes installed above each row of panels with extremely accurate flow rates; the irrigation plant room houses the WRAS approved break tank, pump, valves and remote sensing controller. The overall control of the irrigation system is fully automated with remote sensing capability. 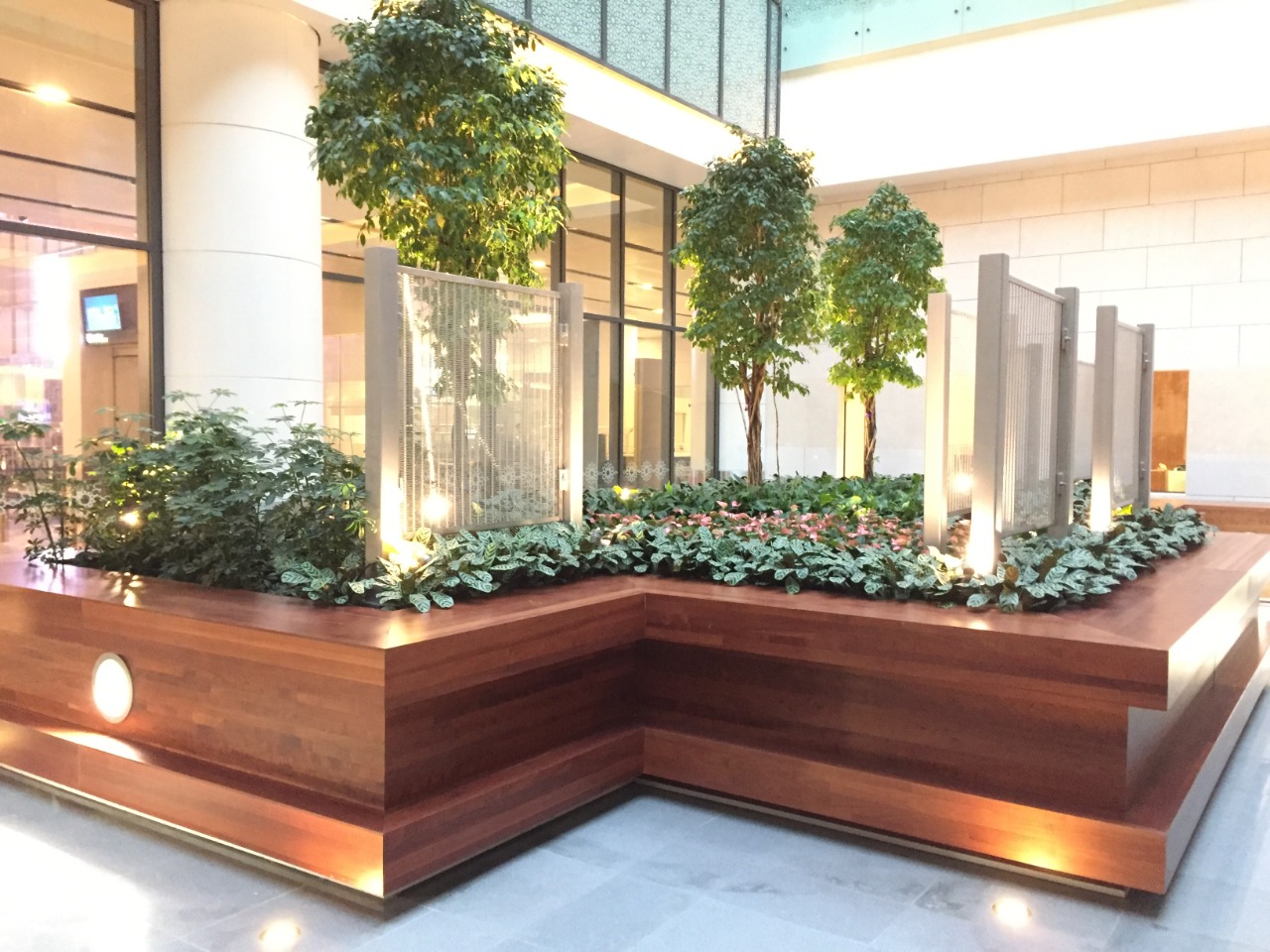 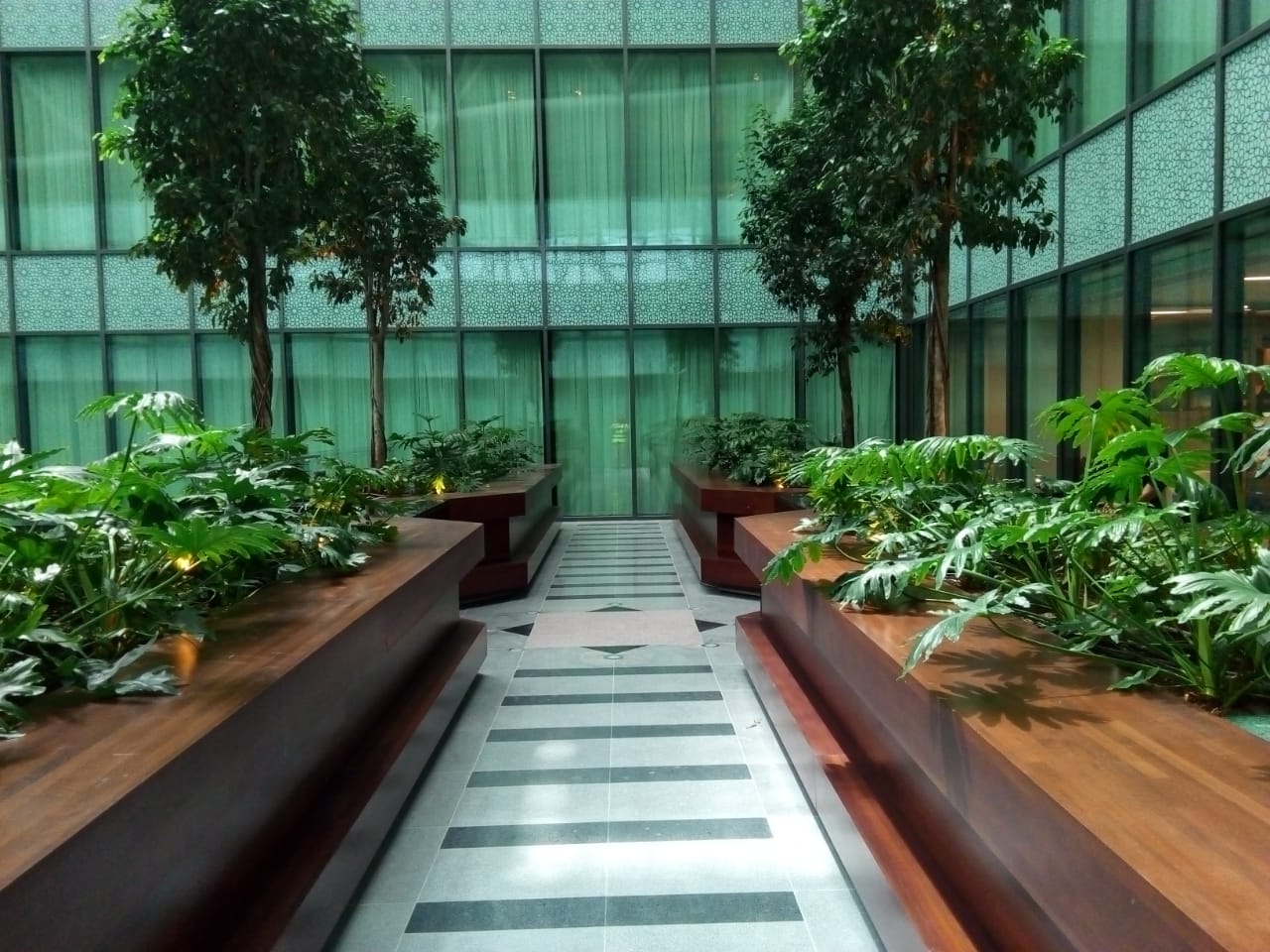 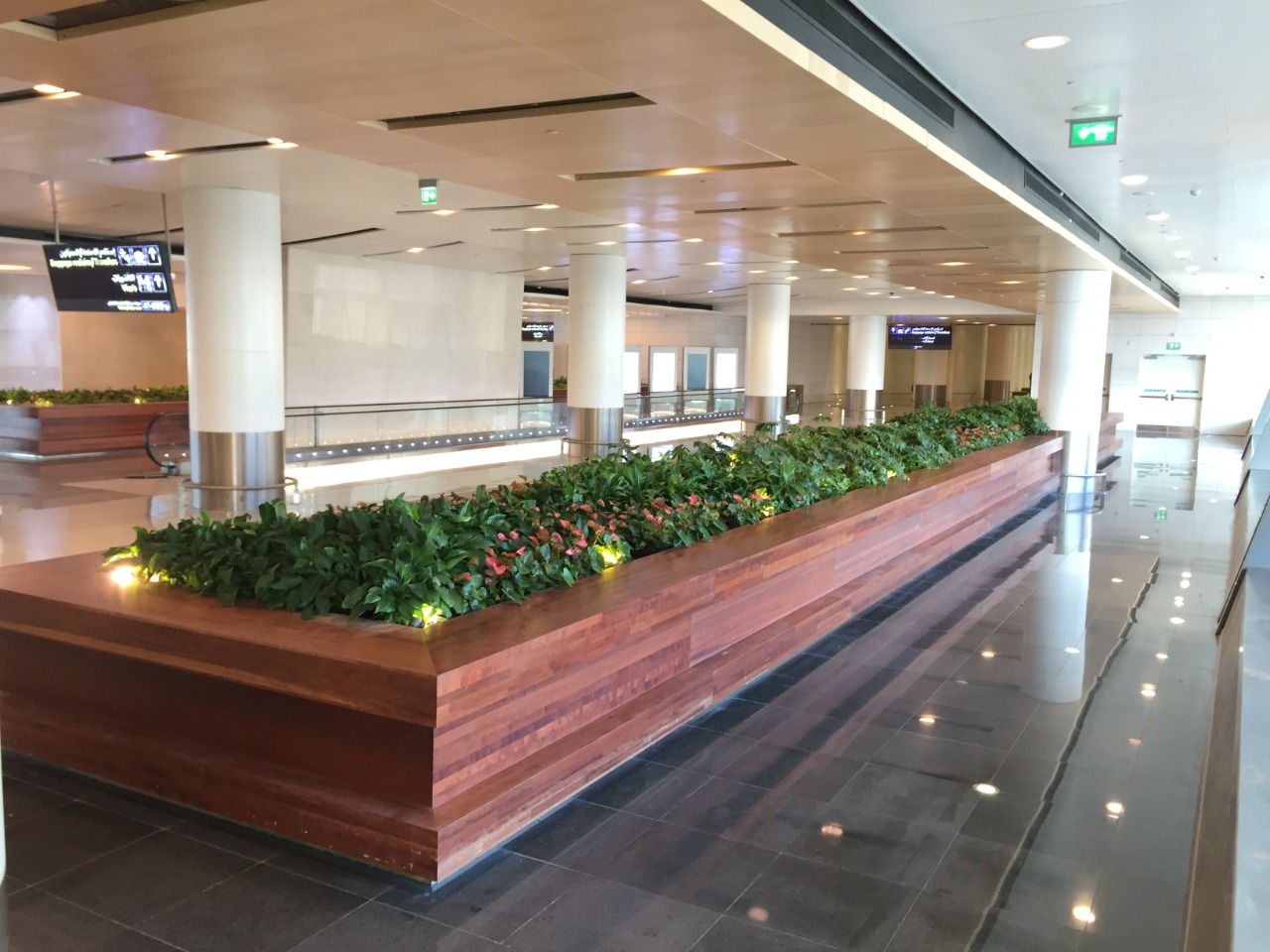 Interior plants are vital to any environment that aims to be healthy, supportive and sustainable.
Interior scaping is the art and science of growing and arranging plants indoors in a thoughtful and purposeful manner. It involves the selection, placing and maintenance of plants to improve and enhance the appearance of the indoor environment.

The new airport has interior plantscape at prominent locations which Proscape has implemented in areas including VVIP arrivals, VIP courtyards, general departure and arrival. Exotic indoor plants and trees were chosen to create the designs; which includes Ficus benjamina as specimen trees with other plants such as Anthuriums, Peace Lilies,
Calatheas, Scheffleras, Syngoniums. A total number of 10,000 plants and trees contribute to the unique
and alluring beauty of the interiorscape. All the interior garden areas are controlled and maintained
by automated irrigation systems. 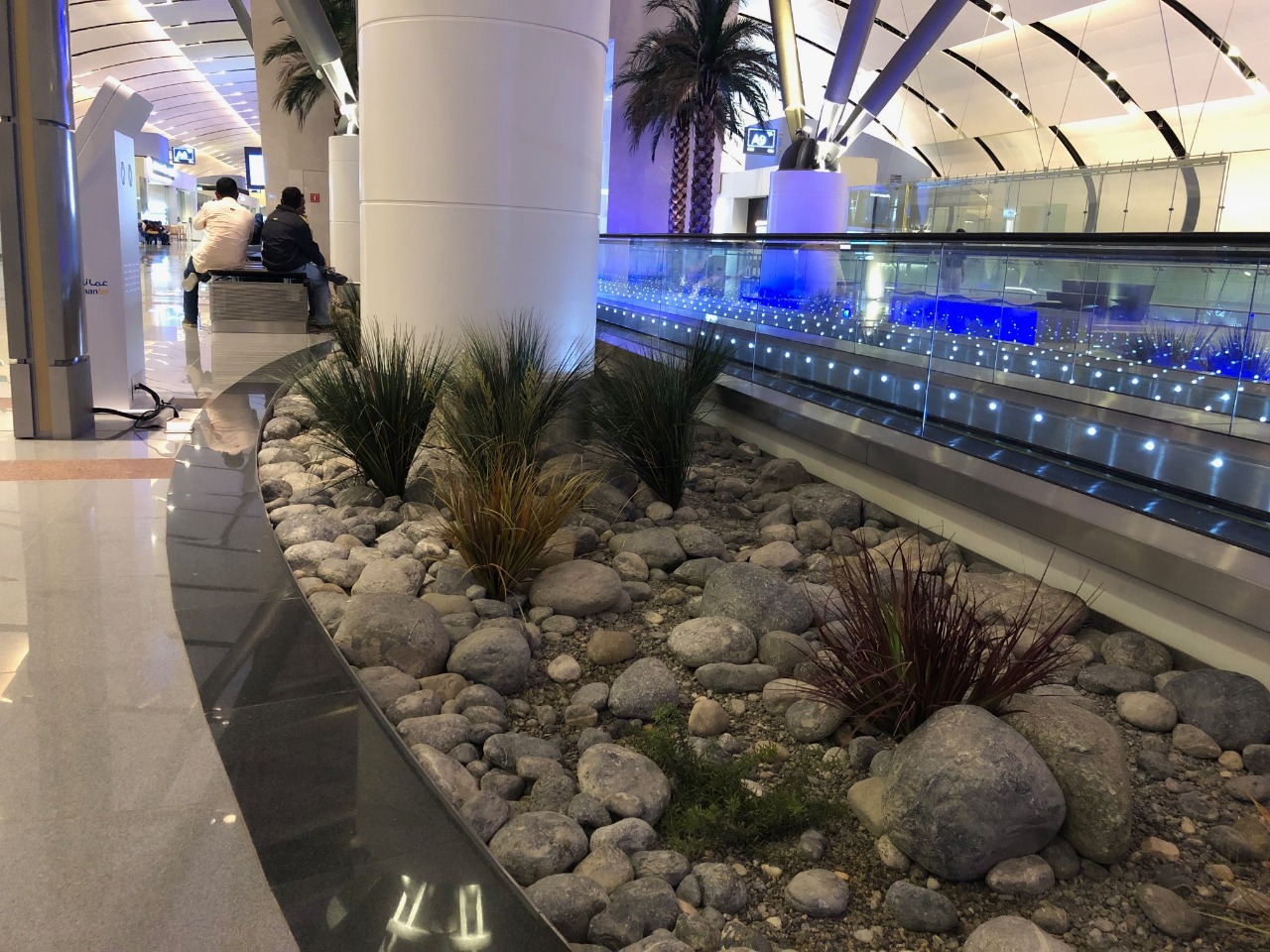 The term Wadi derives its root from the Arabic language. It specifically refers to a dry riverbed that contains water during rainy seasons and is located in a valley-like area of the desert. The new Muscat Airport has a special arrangement to recreate the natural wadi in the interiors of the building.
Proscape LLC (Muscat) had put in earnest effort to make the wadi into a reality, which involved careful craftmanship in the selection of assorted natural stones as well as the arrangement and installation of them by gluing all the stones to the existing base in such a manner to recreate the outdoor natural habitat of Oman.
Approximately 2,400 artificial plants are fixed among natural stones to create the overall wadi effect. These are
located at the departure & arrival areas on both sides of the escalator belts. 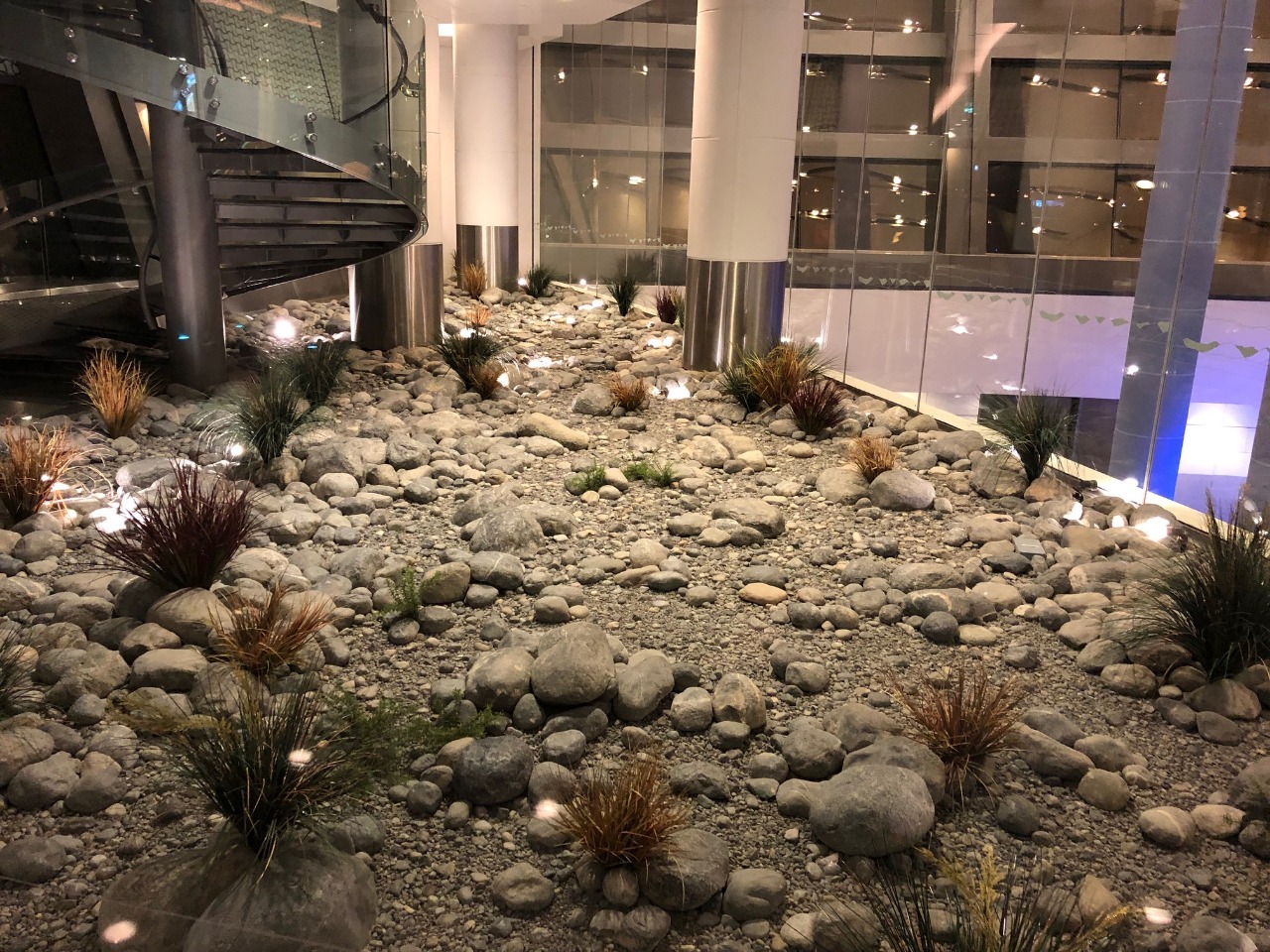 Dubai Parks and Resorts (DPR) is the Middle East’s largest integrated entertainment and leisure destination, located on Sheikh Zayed Road; Dubai. DPR opened to the public in December 2016 and has attracted over 2.5 million visitors from all over the globe. It has become a world renowned leisure facility comprising of six attractions: Motiongate Dubai, Bollywood Parks Dubai, Legoland Dubai, Legoland Water Park, Riverland Dubai and Lapita Hotel Dubai. Six Flags thrill park is also in the pipeline and is expected to open to the public by 2020. The tourist attraction extends over a land area of 25 million square feet and has over 100 rides and attractions.

Riverland (Public Realm) landscaping constitutes all the common land areas between the theme parks and hotels, a total of approximately 55,000 square meters. It is divided into four different zones:

The Peninsula: The 19th century architectural themed zone at the heart of Riverland is surrounded by a man-made river. The beautifully landscaped large outdoor piazza is a popular venue for concerts and festivals.

After careful consideration of the scope and potential challenges involved, the Riverland (Public Realm) deployment works were awarded as a design and build job to Proscape LLC. Their in house design team rose to the challenge and accommodated the changes required as per the site conditions. The scope of work for the project included soft and hard landscaping, irrigation, landscape lighting and the construction of Pergone boundary walls. The Pergone walls were specially imported from Germany, and are another feature of the project that was introduced for the first time in the UAE.

ProscapeLLCwasalsoawardedthe package for the advance procurement of plants for the entire DPR development. This was a challenging and ambitious undertaking tried for the first time in the UAE and required the import of a large quantity of trees and palms from around the world. Consultants were flown to Spain, Italy and Thailand for their selection. Plants were also imported from India, Malaysia and China.

The landscape has almost 190 types of plant species including 6,195 palms; 24,730 trees; 2.62 million shrubs and ground cover, and grass sourced both locally and overseas.

The iconic grand Hero-Tree, Samanea Saman, was specially imported from Thailand and stands at a towering 10 meters with a girth of three meters. It is the largest tree to be successfully imported and planted for any landscaping project in the UAE.